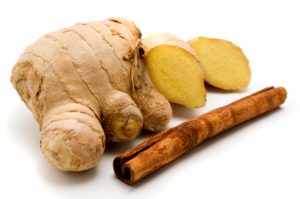 For years, people have recommended drinking ginger ale when sick to help reduce nausea, and throughout history ginger root has been coveted as a powerful medicinal spice. While there are several ways to prepare and eat ginger, my favorite way to experience the benefits of this spice is by making ginger tea with cinnamon.

Ginger is known for a wide variety of health benefits, including:

Plus, it’s absolutely delicious! I usually drink ginger tea at night after dinner to help prepare myself for bed. Ginger is a warming spice, so it’s great for warming yourself up on colder nights.

If ginger isn’t enough of a health boost for you, consider the health power-punch of this drink once cinnamon is added!

Cinnamon is also known for a variety of health benefits:

Wow! Sometimes I have a hard time believing how insanely powerful this ginger tea can be with cinnamon added. 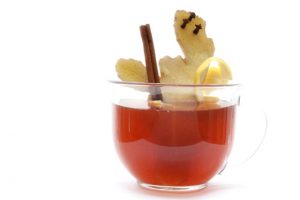 Making ginger tea at home is very easy. And it can be stored in refrigerator for 2 weeks.

Start by cutting about an inch-long piece of ginger off the root and peeling it. Then chop it into coins and place in a pot with about 2 cups of water. Add in the cinnamon stick.

Bring the water to a boil and then turn down the heat and let the tea simmer for about 20 mins.

Remove from the heat and let cool for about 15 minutes after that. This step is very important, as the cinnamon stick must cool for the nutrients to be extracted.

Filter the tea through a fine mesh or colander to remove the ginger pieces and cinnamon stick.

At this point, you will have very strong tea, so I usually dilute it by at least half with fresh water before drinking. Whatever I don’t drink right away I pour into a jar and keep in the fridge. I’ve never pushed the limits on how long it will keep, but I know it stays good for at least 2 weeks.

If you want your tea to be a little sweeter, you can add some raw honey to it while it’s hot.

This ginger tea has become my new favorite tea.

Ginger and cinnamon are both powerful anti-inflammatory agents, among a myriad of other wonderful health benefits. This ginger tea with cinnamon is a perfect addition to a healthy diet, and can protect against colds, the flu, cancer, diabetes, and more! 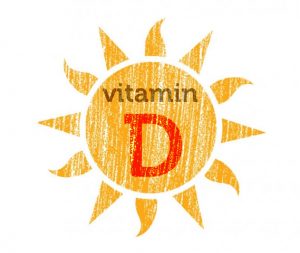 Vitamin D is making the headlines more and more – barely a week goes by without another study linking to a reduced risk. Research has linked the vitamin to a reduced risk of depression, breast cancer and colds and chest infections.

But what is it, how much do we need, and why is it so vital to our health?

Vitamin D regulates the amount of calcium and phosphate in the body, both needed for healthy bones, teeth and muscles. Vitamin D is involved in the activation of macrophages – the hunter-killer cells that engulf and destroy invading viruses, bacteria and even fungi. Vitamin D receptors are also present on other immune cells which fight infection and regulate our allergic responses and inflammation.

The nutrient is also involved in the production of antibiotic-like proteins in the cells lining the respiratory tract. Known as defensins, these proteins stick to bacterial walls and open up holes so bacteria become leaky and implode. Defensins are also active against viruses. It’s therefore not surprising people who have low vitamin D levels – especially in winter – are more prone to colds, influenza, bronchitis and even pneumonia.

And it doesn’t stop there. There are so many more health benefits to making sure you get your vitamin D in daily.